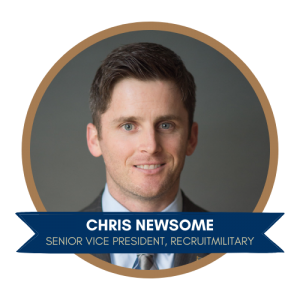 “Transitioning to a Civilian Career: Optimizing Your Military Experience to Secure Your Future” on Friday, Nov. 5 at 1:30 PM EST

Following the attacks on America, on September 11th, 2001, Chris joined the US Army’s illustrious 82nd Airborne Division, and by June of 2002, was shipped to Fort. Benning GA., to complete Basic Training, Advanced Individual Training, and Army Airborne School. Within one month of arriving at Fort Bragg, NC (assigned to the 3/504 Parachute Infantry Regiment), Chris was sent on his first deployment, in support of Operation Enduring Freedom in Afghanistan. Over his four-year span of military service, Chris would complete three combat tours, adding two tours to Iraq, in support of Operation Iraqi Freedom. Throughout his time with the 82nd Airborne Division, Chris was placed in numerous leadership roles, working his way to the rank of Sergeant, and leading fellow paratroopers through the war-torn streets of the Middle-East. Today, the Cincinnati, Ohio resident veteran’s primary role at RecruitMilitary is to manage enterprise relationships and contracts with the federal government with a focus on aggregation and support of America’s military men, women, and their families with career access, and professional development resources.

>>> Find out more about this year’s VET Summit.