It’s almost the New Year, which means you are dangerously close to hearing at least one the following:

“Don’t let another year slip by”

“Have you made your resolutions yet?”

Well, friend, let me tell you something: you don’t need a New You; the current You is just fine.  And while it may feel like years are passing by at a starship’s pace, the reality is if you spend some time really looking at what you’ve accomplished since Point-in-Time X, you’d probably be pleasantly surprised.

And even though it seems the whole world is talking about how best to incorporate change into your life RIGHT NOW, studies show that 80% of those resolutions are dead in the water by February—a combination, probably, of unreasonable expectations and not enough “umph” behind the desire to make a change.

While a lot of people will claim that resolutions and goals are the same thing, we’d disagree. Loudly. With passion. Because a goal—something given thought, and broken down into meaningful steps, tasks and accomplishments, will always beat out that winning line you wrote down on a list on December 31 just because you felt you should.

So, this year, let’s reverse-engineer some thinking. We’ve compiled a “Resolutions” worksheet for you—based off of our Purpose Workshop curriculum—so that you can pick that one thing…that ONE GOAL…that you want to accomplish this year. Don’t get crazy—unless you’re already in NASA training, a trip to Mars probably shouldn’t make the cut. But do take a minute and focus on the one thing that means more to you this year than anything else.  (While you’re at it, grab a copy of The One Thing, which is one of our favorite books in the world to help you figure out What To Do Next)

So instead of finding a “New You” this year, or worrying about filling a list of things that won’t actually happen, use our Fight Motto for 2018 (and no, we don’t know who said it first):

“Make your vision so clear that your fears become irrelevant.” – Somebody Awesome 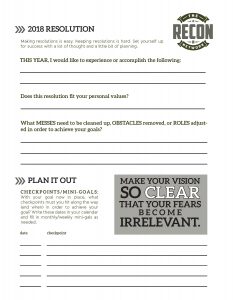